Consistency in the Cloud

The IBM Cloud team recently took on the challenge to achieve visual and UX consistency across their products by transitioning to Carbon 10. Here are the highlights of their journey.

With support from senior leadership, the IBM Cloud PAL team facilitated the transition from Carbon 9 to Carbon 10 for all IBM Cloud services. While this effort was led by the Cloud PAL team, they involved the Cloud community, starting with a Design Jam and a visual design guild.

The transition was split into four phases that most Cloud services completed at the same time. Because the majority of services switched to Carbon together, there was a smooth, unified user experience with the updates.

Using patterns created with Carbon 10, IBM Cloud was able to reduce their user journeys by seven steps and raise their NPS score by 57%. IBM Cloud has also seen increases in operational efficiency for developer and designers now using Carbon 10. They have also found in user research that participants prefer the new designs and the average time to provision a service has improved by 4%.

Carbon 10 was released in Q2 2019. The update included major visual and structural changes to align with the revamped IBM Design Language. Part of these updates involved a redesign of existing components and introduced the UI shell and the 2x Grid. With hundreds of services, IBM Cloud needed a way to manage the transition from Carbon 9 and Carbon 10 at an organizational level.

Creating a pattern and asset library

In order to coordinate the transition to Carbon 10, IBM Cloud leveraged their Platform Integration Experiences team to create a Pattern and Asset Library (PAL) that was specific to Cloud services. Because they were transitioning so many services, IBM Cloud was able to create a dedicated, cross-functional team that was solely focused on supporting the transition to Carbon 10 and the creation of Cloud-specific assets and resources.

Rather than the project being grassroots and trying to convince every single team to participate, the transition started from the top. The IBM Cloud VP of Design, Arin Bhowmick, and Director of Design, Bill Grady, made the case for the effort and mandated that Cloud teams participate.

Creating a PAL and getting the hundreds of Cloud services to adopt both Carbon 10 and Cloud PAL needed a specific dedicated team with a project plan. While the Cloud PAL team managed the logistics of the transition, they wanted to build a community around the effort so they brought the whole organization into the effort, starting with a Design Jam.

Kicking off with a Design Jam

In May 2019 when the effort was just beginning, the Cloud PAL team held a Design Jam. Designers and developers across all the Cloud services came together for a day and worked to create preliminary patterns using the Carbon 10 guidelines. They were split into random groups and given a design pattern to create during the workshop. Because the members of each group all had different roles and came from different teams, they were able to share and build on different perspectives and this led to the teams coming up with pretty solid first draft patterns. 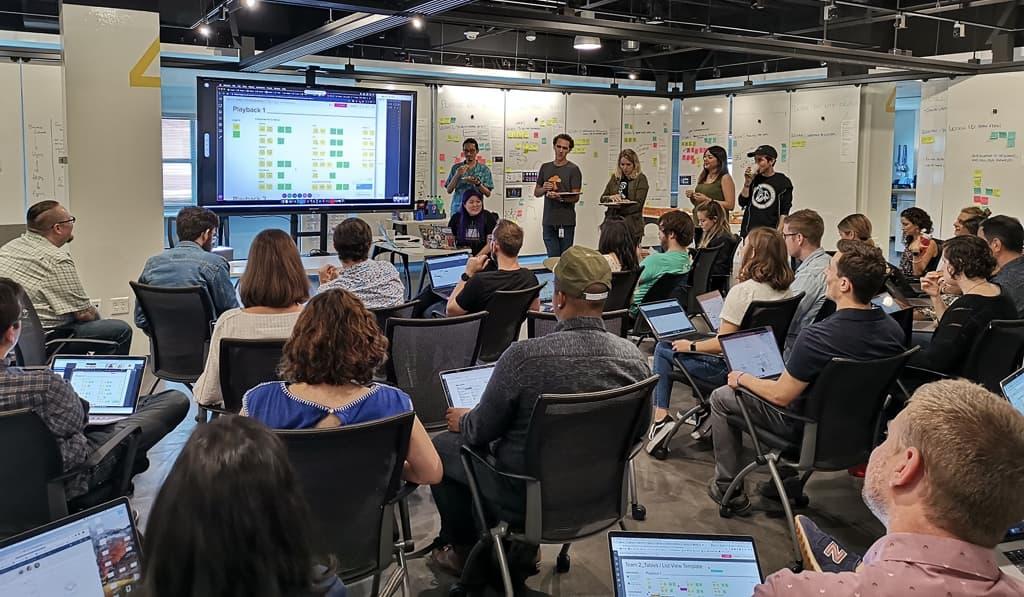 The patterns that came out of the Design Jam were a great starting place, but they were simple and safe. They lacked the brand identity and excitement that the Cloud PAL team knew was necessary for the effort to be successful.

A Cloud visual design guild came together to create explorations for the Design Jam patterns to push them further. Each week the guild met with the Carbon team to receive feedback and ensure the explorations were aligned with Carbon 10 and the IBM Design Language. When the templates and patterns were locked down, they were the best they could be and had been vetted by the Carbon team, the Brand team, and the Cloud community. 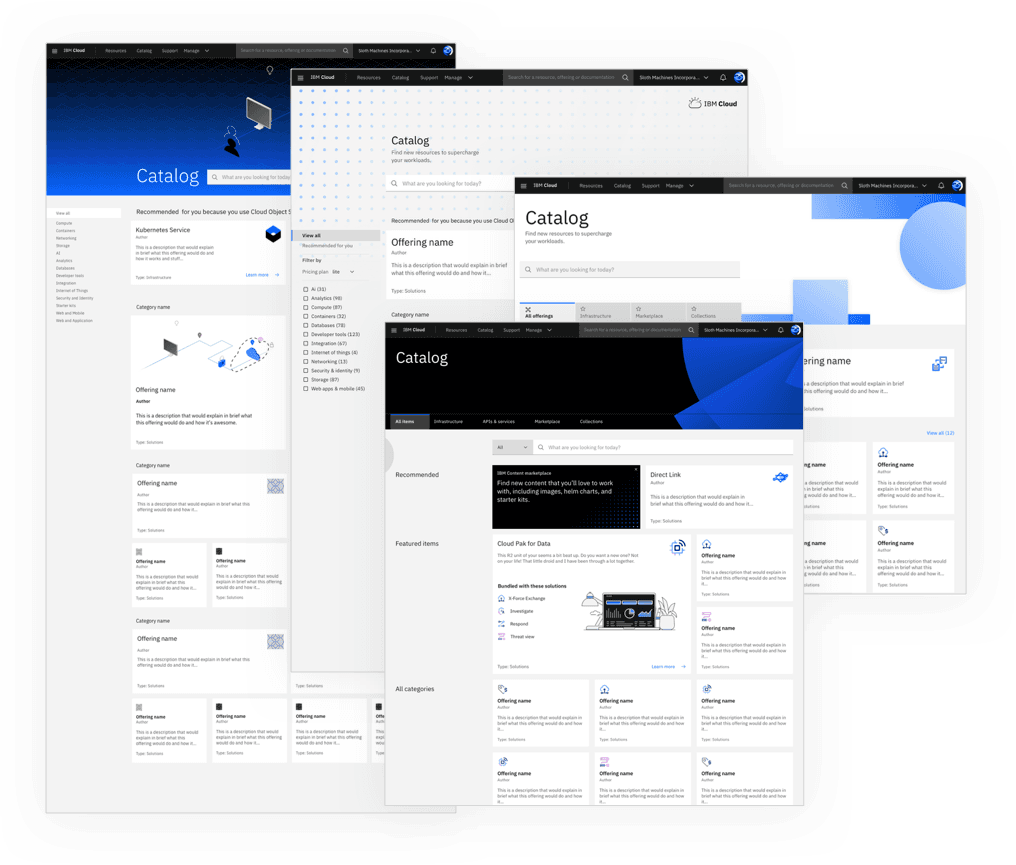 Iterations of the catalog page from the visual design guild.

The Cloud patterns included bespoke APIs which meant when teams used a pattern or template, they were given all the code with the APIs and parameters baked in so that everything worked the same and multiple teams didn’t spend time implementing the same APIs over and over.

Over the course of the transition, Cloud PAL designed a total of 22 patterns that cover 90% of Cloud UIs.

Initially, the Cloud PAL team discussed supporting adoption in groups, so that not every team had to transition over to using Carbon 10 at the same time. Ultimately, they decided against this because they did not want to have to provide dual maintenance while teams switched over. Instead, they decided to use a phased approach with four phases that every team had to follow.

With the support of their design executives, a governance model was established. During each phase, service teams had to go through a review with the Cloud PAL team. These reviews followed well-documented rubrics and ensured that teams were meeting the requirements for each phase.

Requirements on the rubric were each given a priority level of Priority 1, Priority 2, or Priority 3. If a team failed a Priority 1 requirement, they could not release the update until the requirement had been addressed. The reviews gave the Cloud PAL team insight into how teams were applying the Carbon and Cloud PAL guidance and gave them an opportunity to address any miscommunications or inconsistencies before the services were released.

While most of the Cloud services were required to participate in this effort, it did not make sense for every single service to participate. The governance model included an exemption process for teams that did not think their services should adopt Carbon 10 and the Cloud PAL.

This process, however, was just as involved as adoption itself, so it was not an easier route for teams to take. Teams who wanted an exemption needed to get sign off from their executives and needed to provide a real justification that outlined the client impact. They found that many of the teams applying for an exemption really just needed a deferral to push out the timeline. The Cloud PAL team also found that several of the teams asked for exemptions because they did not have development resources for the adoption effort, so they were able to provide extra support to those teams and help with development.

The transition resulted in many tangible benefits for the end user.

IBM Cloud estimates their design and development teams saved 2,000 hours per pattern, making them 80% more efficient than coding or designing screens from scratch. Cloud PAL created “connected components” that saved teams even more time. They removed hundreds of lines of code from each usage since these components had APIs built in, and they created both visual and data consistency across the platform.

Cloud PAL is supporting adoption for the few teams that have been delayed. They are also focusing on continuously improving and developing new components and patterns for their services.